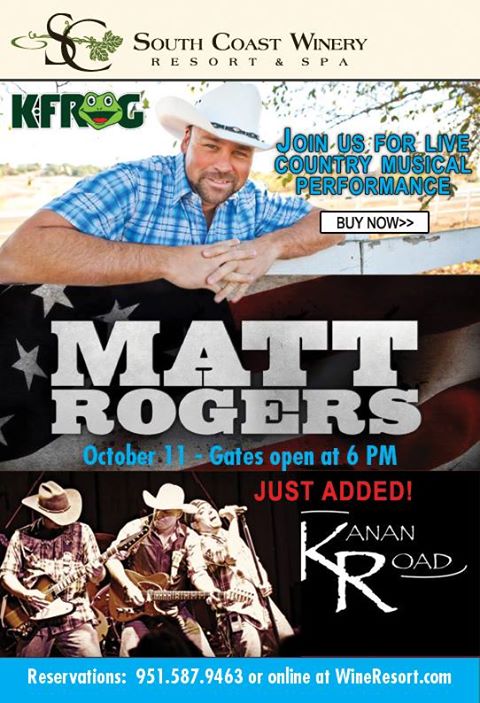 Friday, October 11th, K-Frog FM and South Coast Winery Resort and Spa invite you to an evening of country music in wine country. General Admission Tickets are still available for purchase, HERE but don’t wait! VIP admission is sold out at this time.

Matt Rogers has a varied history, with his hunger for competition and winning ignited in 2001, where as an Offensive Tackle for The University of Washington, his team defeated Drew Bree’s and the Purdue Boilermakers in the BCS Rose Bowl, according to his bio. “After parting ways with the Cincinnati Bengals, Matt was a finalist on Season 3 of American Idol. Then he hosted Discovery Channel’s hit show “Really Big Things” and numerous shows on CBS, ABC, and VH1.”

Now, Matt Rogers has found his unique talents and home as the host who reunites U.S. soldiers with their loved ones on Lifetime’s heartwarming “Coming Home,” which he also sang and co-wrote the show’s country theme song. Currently Matt hosts “Summer Camp” on USA Network, on Monday nights following WWE.

“I love my Lord Jesus, My family, My Country, Music, Fast Boats, Big Guns, Kind People, and doing the Lord’s work. I actually talk to my fans too!” Rogers states on his Facebook Fan page, which will be put to the test tonight at South Coast Winery, in the meet and greet with the artists in the South Coast Winery Barrel Room for VIP guests.  Also joining the Matt Rogers Band is the popular Kanan Road, who will kick off the night at 7 p.m.

Fresh grilled food, award winning wines, and an array of prizes and give-a-ways top off this family friendly engagement to ensure an evening of pure entertainment and fun.